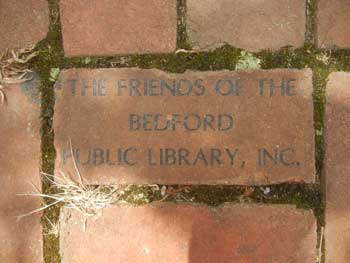 rted out encouraging volunteer work in the tiny library, the Friends also saw their fund-raising efforts as a way to supplement the library’s limited budget. The group also saw themselves as advocates for the building of a countywide library system and for a vastly expanded Bedford (City) Library facility. As early as 1980 the Friends petitioned the city and county governments to develop a regional library system. By 1980 the Friends were holding two Book Sales a year, which netted between $200-$400 each. In 1983, an anonymous donation of $10,000 was received for the expansion of the library.

Financial Contributions
In 1984, the Friends still had a tiny budget and were content to donate $2,000 and thousands of volunteer hours to the library. Membership grew slowly. This low-key growth and level of donations continued until 1991, when the monetary donations suddenly doubled to almost $4,000 a year. Within two years, the Friends would step up to the plate and transform their organization by pledging $40,000 to purchase an elevator for Bedford Central Library, which was finally scheduled to be built. The construction of Bedford Central Library began in December,1992. The pledge was paid off in 1996. The Friends also donated $5000 to an Opening Day Collection. By 1998, the Friends were giving an average of $9-10,000 in annual support to the library. In 2000, to celebrate the 100th Birthday of the Bedford Public Library System the Friends donated $20,000. This contribution brought their total gift giving to over $100,000 in twenty-three years.

Purchases
The Friends have donated money for numerous purchases over the decades. These include microfiche equipment, microfiche of the Bedford Bulletin’s entire publication history of over 120 years, copy machines, type writers, display racks, a stage, carpet and stage lighting for the Bedford Room, an oriental carpet, cherry display cabinets, chair molding which allows the hanging of public art shows in the building, furniture,  a stove for the meeting room, computers, printers. This is in addition to thousands of dollars for books, compact discs, videos, DVD’s, software and periodicals. 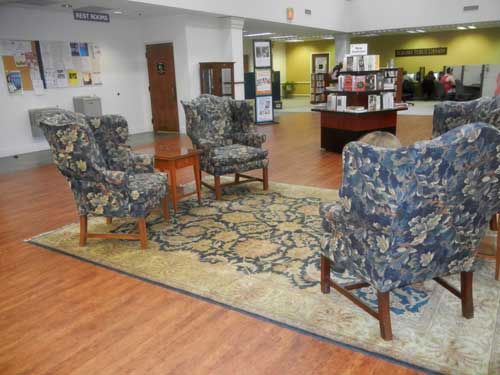 Programming/Art Shows
The Friends have also been instrumental in developing programming for adults and children as the Library’s budget has been limited. From 1995-2005, the Friends co-hosted an annual quilt show with Peaks & Pieces Quilt Guild. The Quilt Show featured contemporary quilts and  attracted almost 1000 people to the library over 10 days. We have hosted numerous authors and book talks, including Sharyn McCrumb, known for her fiction which celebrates the Appalachia area, Dr. James Robertson, author and Civil War scholar,  and David Baldacci, another New York Times Best-selling author. Most popular have been the hundreds of musical performances, story tellers, and hands-on workshops on a variety of topics from origami to book making. The Friends also have a history of hosting numerous art exhibits each year from an Annual Membership Art exhibit to exhibits of the work of locally recognized artists.

The Friends do not receive any monies from the town (former city) or county governments. The library is part of a larger library system, which serves both the city and county of Bedford, so that budget allotments from each governmental body are made based on circulation figures at each library branch. All libraries are open to both city and county residents.

Lobbying Efforts
The Friends were the first and most active organization involved in lobbying for the passage of a seven million dollar bond referendum to build five branch libraries as part of the library system. The Library Board was not permitted to use public funds to lobby on behalf of the library, so it fell to the Friends to do so. The Friends purchased advertising, launched a “letter to the editor” campaign and spoke publicly to urge the passing of the referendum. It passed resoundingly.

Literacy & Books for Babies
The Friends have long supported the promotion of literary in our community and since 1995 have funded a Books for Babies Program. Parents fill out our postcard with the name of their newborn infant and mail it to the library. The Friends, in turn, purchase a book for the child, which is put into the collection. The parents are notified and allowed to check the book out first. We encourage parents to read to their children early and often and  to use the resources provided by the public library. We add around 100 books to the Library collection each year through this program and we hope that we are able to inspire new readers from a very early age. Friends money is  given annually to support the Summer Reading Programs (both Children and Adult), and many other children’s programs as requested. The Friends have brought numerous children’s authors, storytellers, and musical programs to the library as well.

The Robin Taylor Memorial Continuing Education Scholarship
.The Friends also have established  this $500.00 annual scholarship fund for the library staff at Central who are pursuing education or training relevant to their library employment.