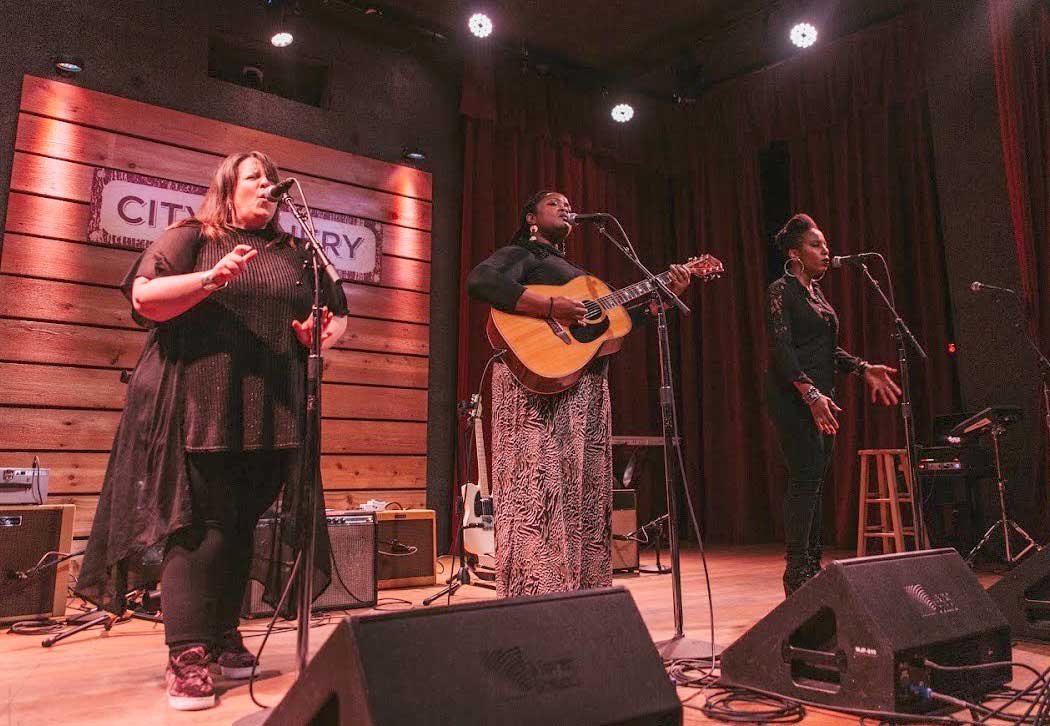 “Kyshona effortlessly grooves between roots, R&B and folk music. On ‘Fear’…she digs deep into a swampy hook that dredges the depths of our subconscious. While the song explores all of the ways we tell ourselves what we can’t do, Kyshona imbues it with the determination needed to free ourselves from our doubts.” – The Boot

For a singer-songwriter, there’s no more basic function than getting onstage and getting something personal off your chest. The therapeutic qualities of the experience have seduced countless confessional composers, some of whom make known that they hold unfiltered expression as their highest artistic aim.

Kyshona Armstrong started out enabling others to enjoy the healing properties of songwriting, and keeping her thoughts to herself. When you’re a music therapist to incarcerated and institutionalized adults and school children with emotional behavior disorders, artistic considerations aren’t even on the table.

“I definitely had to accept the fact that when I’m writing with a patient, whatever they want to do is what they want to do,” Armstrong tells the Scene as she nurses a latte in East Nashville. “It’s their song: ‘Even if it might not fit in a form, if that’s what you want to say, say it. We’re not writing a big hit. This is for you.’ “

When Armstrong worked first in the state mental hospital, then the public school system in Georgia, she found that her co-writers often clung to chant-like, circular song ideas. “They would find this melody they liked and they would stick to it,” she explains. “It was theirs to keep. It wasn’t hard to hold onto.”

Armstrong had focused on oboe at the University of Georgia — that and steel drums, which she played in the college’s Hawaiian-shirt-sporting ensemble, Tropical Breeze. But since neither instrument was all that well suited to coaxing patients into musical self-expression, she got into singing, playing acoustic guitar and songwriting.

When describing the positions she held during her decade or so in the mental health field, she punctuates each chapter with the same phrase: “That got kinda heavy.” The weight of it was what eventually moved her to begin penning her own tunes.

“A lot of my first songs were dealing with what I saw my patients struggling with,” she recalls. “A lot of my songs were about the stories that I would hear from them. Because I can only take on so much of people dumping. So I had to get rid of it and shed it somehow. I think telling their stories was one way for me to go out in the world and be like, ‘There’s so much more happening out there.’ For me, that was therapeutic. I don’t like to talk about myself, but I’ll talk about everybody else if you want me to share a story.”

At a certain point, her emotional investment in her patients’ pain became too much to purge at coffeehouse open mics. “You’ve gotta know when to tap out,” she says. “I was like, ‘I’m not of any use to these kids if I can’t give myself as fully as I used to.’ “

So Armstrong got on the college singer-songwriter circuit, blending skills of empathizing and entertaining. Her set lists might put a strummy version of Britney Spears’ “Toxic” next to “Confined,” a song she’d written with a couple of 20-somethings in the mental hospital. They were the hip-hop heads in the patients’ band — otherwise made up of Elvis-obsessed middle-aged men — and they’d wanted a song in the group repertoire that spoke to their own experience.

Besides teaching institutionalized adults and emotionally troubled school kids how to have healthy interactions with instruments in hand, Armstrong served a similar mission on the board of the Southern Girls Rock Camp in Athens, Ga. And that made her a shoo-in to volunteer at last summer’s Tennessee Teens Rock Camp, where she met a bunch of the women with whom she’ll perform at the girl group tribute She’s a Rebel a few days after playing her own show at 12th & Porter.

Armstrong moved to Nashville in January 2014, spending the first couple months commuting back to Athens to record her album Go, but easily made friends and landed bookings in local folk singer-songwriter, pop and soul scenes once she was around more. Smack-dab in the middle ofGo is a song that distills the insights of her therapeutic work and the artistic aspirations she’s developed since. Called “Cornelius Dupree,” it’s the turbulent channeling of a black man’s real-life experience serving 30 years in Texas for rape and robbery before being exonerated. Rather than narrate the external details of Dupree’s story, Armstrong gives voice to the searing physical and emotional strain he must’ve felt having to defend his innocence for so long.

“That one took me a long time,” she says of the song, “because I wanted to do it right. I tried it from the outside looking in. But in the end I was like, ‘I have to put myself in those shoes.’ “

She adds, “The injustice that Cornelius suffered, on a much smaller level I have experienced that myself, just being a black woman living in the South. I’ve been held by the police before for nothing, and it’s frustrating. I’ve never been imprisoned, but I’ve been held aside. I remember the injustice I felt and the anger I felt. But I’ve always been taught I have to be extra kind, extra polite to compensate. …With his story, I think I just got fed up.”

At college shows, Armstrong urges students to look up Dupree’s story on their phones — and hopefully expand their awareness of human suffering — even as she’s singing her song. “Cornelius Dupree” had a similarly awakening effect when she performed it at a house concert 20 minutes outside of Ferguson, Mo. She’d driven up strictly to join the protests after Michael Brown’s shooting, but accepted a friend’s invitation to a combination concert and cookout in the suburbs one evening. Folks there seemed downright oblivious to the neighboring turmoil. At the end of the night, the host thanked her for getting their attention.

Armstrong has reached the point where she embraces repetitive internal rhythms that emerge in some of her songwriting — likening them to both gospel spirituals and the viscerally simplistic utterances of her former patients — and she’s delivering her roots-soul originals with articulate warmth and newly claimed authority.

“I feel like I’m only just now stepping into this activist role,” she says, “or not activist, but someone who speaks out or brings up a subject that’s uncomfortable. In the past, I haven’t been the one to [say], ‘I’m gonna throw some mess on the table, and we’re gonna talk about it.’ But I want to be.”