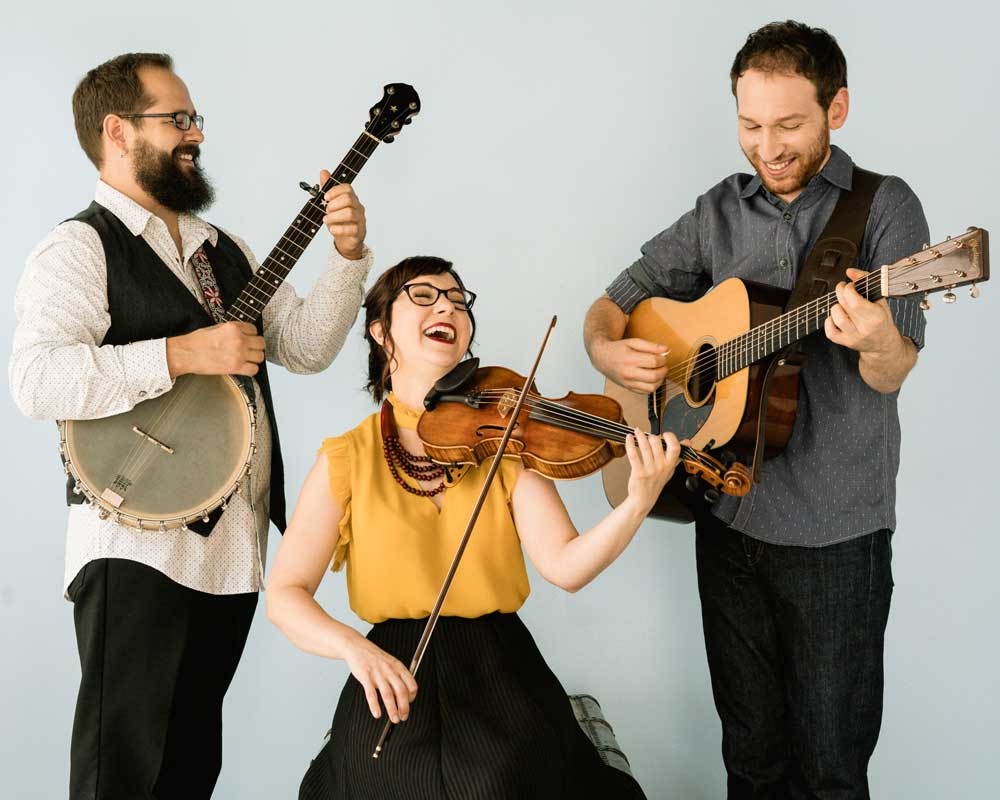 Fiddler, singer, and stepdancer April Verch knows how relevant an old tune can be. She was raised surrounded by living, breathing roots music—her father’s country band rehearsing; the lively music at church and at community dances; the tunes she rocked out to win fiddle competitions. She thought every little girl learned to stepdance at the age of three and fiddle at the age of six. She knew nothing else and decided early on that she wanted to be a professional musician.

She took that leap, and for over two decades has been recording and captivating audiences worldwide, exploring new and nuanced places each step of the way. On February 17, 2017, she will release The April Verch Anthology (Slab Town Records), an 18-track collection celebrating her life’s work. Hand-picked by Verch, the songs on this compilation offer an enchanting mix of regional Canadian, American old-time, bluegrass, country and Americana tracks.

The April Verch Anthology is a testament to the many chapters in Verch’s musical journey. Moving from exuberant stepdancer to fiddle wunderkind and silver-voiced singer; from upstart prodigy to mature and reflective songwriter, interpreter, and storyteller.  The compilation is an excursion through Verch’s 1998-2015 recordings, featuring tunes and songs dear to Verch as well as a healthy dose of fan favorites and two newly recorded tracks.  “Through this anthology, I am reminded of the inspirations with which I began and of the hopes I hold for the future.  I take a moment to reflect and to

While Verch is perhaps best known for playing traditional fiddle styles from her native Ottawa Valley, Canada, her performances extend into old-time American and Appalachian styles and far beyond, for a well-rounded tour-de-force of North Americana sounds. Verch and her fellow trio members pare down their arrangements, highlighting the simple pleasures of upright bass, guitar, clawhammer banjo, voices, fiddle, and stepping in intimate conversation. At the heart lie Verch’s delicate voice, energetic footwork, and stunning playing.  Sometimes she sings, steps and fiddles all at once, with apparent ease and precision. Verch is – as they say – a triple threat in performance, her live show a beautiful companion to her music: versatile, robust, and masterfully executed.

Verch won’t be the one to tell you about her championship titles, nominations, and awards, or the fact that she was one of 6 fiddlers who represented the Canadian fiddle tradition to the world at the 2010 Olympic Wint

er Games in Vancouver, as part of a segment called “Fiddle Nation”.  Instead, in speaking with her, you’ll hear about how passionate she is about sharing her music; in small gatherings in remote communities in Iqaluit, to large prestigious concert halls like Mozartsal in Vienna.

Even as she plays with the tradition she inherited, Verch keeps the community-fired celebratory side of her music at the forefront, honing a keen awareness of how to engage contemporary listeners. It’s why Rolling Stone cited her “One of the 12 best things we saw at MerleFest in 2016.”

“Just as contemporary bluegrass has Alison Krauss as an ambassador, the Ottawa Valley has April Verch,” said NPR’s Marco Werman on “The World.”  And Verch never forgets the roots of her music, that connection to the people out there in the audience, on the dance floor, to the community sparked by a good song.  “It’s about joining together to celebrate everyday life, through music.  We’re all in this together.”

The April Verch Band features world-class musicians Cody Walters on upright-electric bass and banjo, and Alex Rubin on guitar and mandolin . Together, these three passionate musicians tour tirelessly across Canada, the United States, the U.K., Europe, Australia & China. They have established a reputation as consummate performers, winning over audiences not only with sheer virtuosity on their respective instruments, but also with charm, humor and boundless energy on stage.

Cody grew up in rural northeastern Kansas, and started playing upright bass while attending college at the University of Kansas in 1999.  The sound of the instrument grabbed hold of him and never let go.  He has since played in various bands, performing different styles of music, from bluegrass to old-time, jazz to Latin, folk and country and most spots in between.  More recently he has added the claw hammer banjo to his roster of talents, adding a melody to the low end of his sound.  His banjo style has quickly become his own and is one of the highlights of an AVB concert, especially for old time fans!  He currently resides in Horse Shoe, North Carolina and has been a member of the April Verch Band since January 2007.

Alex is a Boston-based guitarist and educator.  At the age of 17, Alex turned his musical interests from classical violin to bluegrass guitar, and has yet to reconsider.  After completing an undergraduate biology degree at Cornell University in 2011, he returned to the vibrant Boston music bluegrass scene, studying privately with Berklee professor John McGann.  In 2014, Alex started the folk duo, No Bones About It, with banjoist BB Bowness.  Together they have performed around the northeast, including performances at the Freshgrass Music Festival and Club Passim, as well as completing a country-wide tour of New Zealand.  Alex proudly joined the April Verch Band in March 2016.