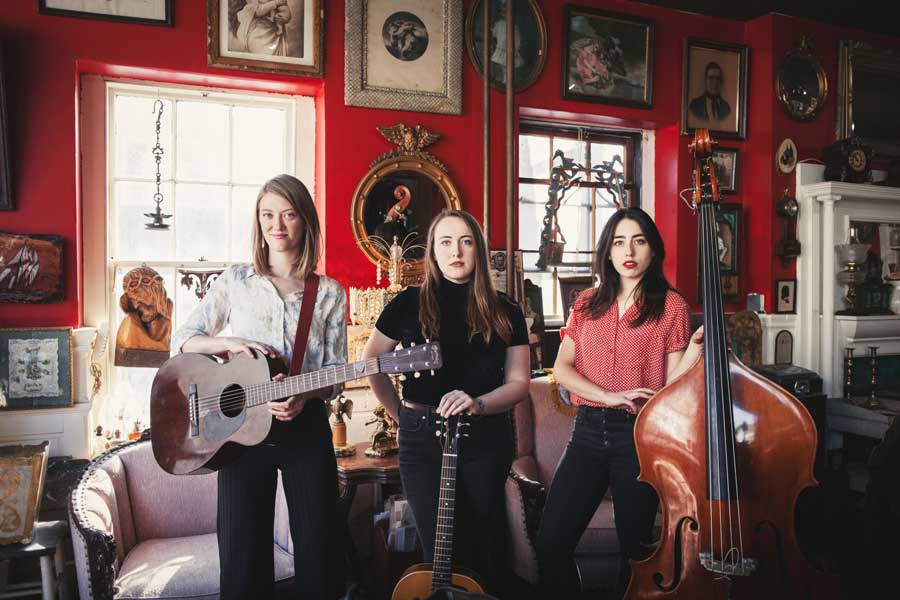 Lula Wiles is a band deeply rooted in traditional folk music, but equally deep is their devotion to modern songcraft. Their songs span from heartbreak-drenched acoustic ballads to honky-tonk swagger to contemporary grit and back again, all anchored by powerful three-part vocal harmonies. Their lyrics are fiercely honest, littered with reinvented folk tropes and evocative images – a rainy field of daisies, a dusty bar lit by Christmas lights, an unmade bed. They deliver love songs that are at once defiant and heartsick, as well as new contributions to the folk ballad canon and timely explorations of what it means to live in America today. Drawing from the deep wells of traditional old-time music, classic country, and contemporary indie-folk-rock songwriting and arranging, Lula Wiles melds diverse influences to create a sound all their own. The three band members deftly swap instruments and frontwoman duties, with Ellie Buckland (vocals/guitar/fiddle), Isa Burke (vocals/guitar/fiddle), and Mali Obomsawin (vocals/bass) each contributing their own singularly expressive vocals, instrumental lines, and songwriting. Onstage, the band gathers tightly around a single microphone for a spirited and emotionally resonant live show.

If you ask them about their self-titled debut album, they’ll be quick to tell you it was a long time coming. The album’s eleven original songs were written over the course of the preceding four years, tested and lived in on stages and in bedrooms and backyards in Maine and Boston, and reborn through the band’s collaboration with producer/guitarist Adam Iredale-Gray and drummer Sean Trischka. Self-released on May 27, 2016, the album represents Lula Wiles’ exploration of the space where traditional folk meets modern songwriting and production. Acclaimed singer-songwriter Aoife O’Donovan calls the album “a stunning collection of self-penned songs about love, loss, and drinking – the perfect blend of modern and timeless.”  Their sophomore album will be announced later this year.

Though the band is young, all the members of Lula Wiles have spent their lives grounded in songs. Born in Maine to musical families, they began playing music together as kids at Maine Fiddle Camp, and eventually each made their way to Boston to study at Berklee College of Music. Isa and Ellie began performing as a duo in 2013, and Lula Wiles was born when Mali joined the band a year later. When Lula Wiles performs, the band’s many years of friendship are clear from their electrifying musical chemistry and alchemic vocal harmonies. Now based in Boston’s thriving and close-knit roots music community, Lula Wiles have performed at premier festivals and clubs throughout the eastern United States, including Club Passim, the Sinclair, Grey Fox Bluegrass Festival, Fresh Grass Festival, and Green River Music Festival. They’ve recently expanded their touring territory to Canada and Europe, and have shared stages with artists like the Wood Brothers, Aoife O’Donovan, Darlingside, Sarah Jarosz, and Tim O’Brien. Roots authority No Depression predicts Lula Wiles “will be a huge force on the Americana scene for years to come.” All proficient vocalists, multi-instrumentalists, and songwriters, the three women of Lula Wiles are each uniquely powerful in their own right; but combined, they are a force to be reckoned with.