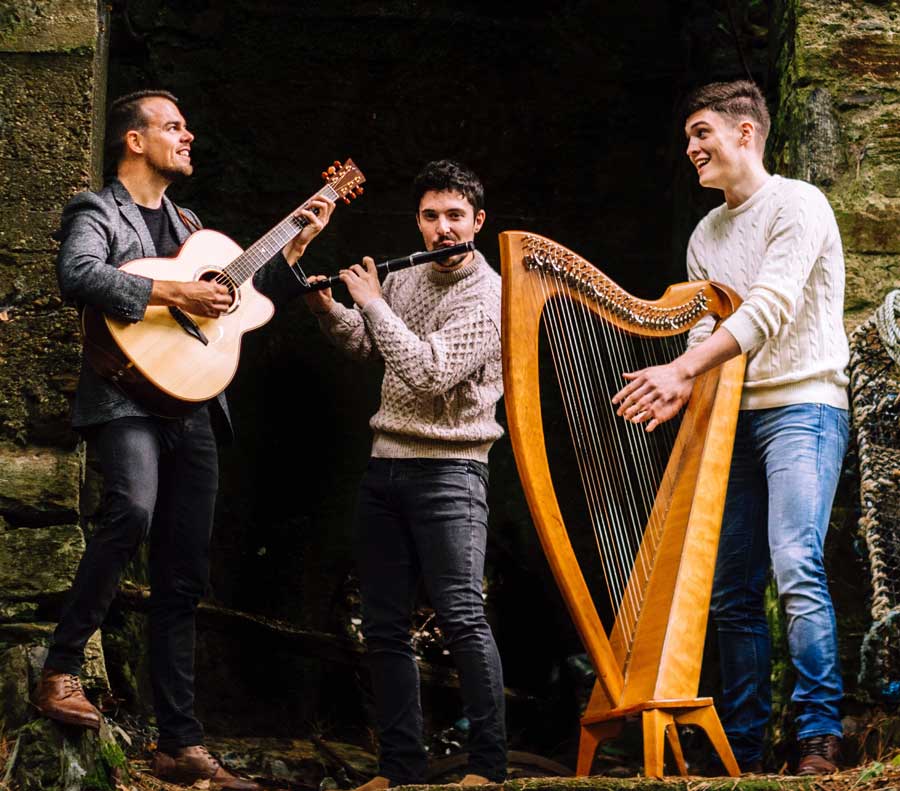 Ciarán Bolger is an entertainer, singer and guitarist from Garraí Ard in the village ofArdmore in Connemara. Learning whistle and traditional sean-nós singing at a young age,Ciarán developed a love and respect for the music tradition of Connemara. Focusing on guitar in his teens, Ciarán explored a mixture of traditional and contemporary music. This exploration has formed the basis for his emotive vocals and also his vibrant and expressive guitar style; drawing inspiration from a multitude of genres.After studying Primary Teaching in Limerick, Ciarán spent some time teaching before taking up a residency commitment at Raglan Road Irish Pub in Downtown Disney, DisneyWorld Orlando with his band “The West Coast Trio”. Since then, he has spent many years performing and touring professionally with bands and Irish music and dance shows. Ciarán has toured in over a dozen countries with acclaimed Irish Music and Dance Show,Celtic Legends, performing in some of the most prestigious venues in Paris, Rio DeJaneiro, Geneva and across the globe. In 2017 Ciarán spent time performing aboard the cruise ships, The Disney Magic and Disney Fantasy, on the high seas with the DisneyCruise Line Company. More recently in 2018, HighTime performed as part of the long running Irish Spring where they played a huge 35 date tour of Germany.Inspired by folk heroes such as Bob Dylan, The Clancy Brothers and Tommy Makem,Christy Moore, Neil Young and Bruce Springsteen to name but a few, Ciarán has amassed a repertoire of unusual and rare ballads, stories and songs from the folk traditions of Ireland, the U.K, Canada and U.S.A. He is a natural entertainer and storyteller; always keeping the story and soul of the song as a guiding light.

Michael Coult, originally from a town called Glossop close to Manchester, developed a passion for traditional Irish music at a very young age. With Manchester as a hub for learning Michael developed his flute playing heavily influenced and encouraged by the city’s venerated and also lesser known talents in the Irish music tradition.Michael moved to Limerick in 2005 where he completed a BA with Honors in Irish Music and Dance. During this time he gained exposure to many masters of the tradition that visited and gained a breadth of experiences with performance, cross-cultural exchanges,recording and composing. Since then Michael has travelled the world with various band sand touring shows to every continent on the globe.Whilst his craft is playing flute and whistles Michael is well known on the Irish session scene as a guitar accompanist and an exponent of the uncommonly used ‘Open D’tuning.He works extensively with the incredibly popular touring production, “Celtic Legends”playing endless sellout shows across mainland Europe and Morrocco, Australia, Lebanon,South America and beyond. A founder member of contemporary Irish/Scottish roots band ‘The Recollective’, Michael is currently working on his debut solo flute album.Having played with both Ciarán and Séamus throughout the years, Michael is delighted to join HighTime on their debut tour of the USA.

Séamus Ó Flatharta’s skills in dancing, singing and playing music reflect his personality. Séamus meets each discipline with a passion and quiet zeal backed up by a love of the traditional Irish music heritage. Since the age of 16, he has been making waves in the fields of music, song and dance across the globe; performing in China, The U.S.A,Canada, The United Kingdom and throughout mainland Europe. He had the privilege of performing more recently alongside Cherish the Ladies at the world renowned CelticConnections in 2017.Born into a family steeped in Irish traditional music, it wasn’t long before Séamus got his eager hands on the Tin Whistle, learning to play his first piece of music before developing into an accomplished multi-instrumentalist.An incredible 23 time all Ireland champion on harp, whistle, singing and dancing, Séamushas performed on numerous tours, most recently with the prestigious Irish Spring Festivalof Irish Folk Music, an Irish music and dance tour traveling throughout Germany. He has had the privilege of traveling alongside numerous accomplished musicians from around the world and some of the finest ambassadors of Irish traditional music. For all that he is young, Séamus has made numerous television appearances and has been featured in many radio programs throughout his early musical career. Séamus is one of the few of his age responsible for maintaining the oldest style of Irish singing. Sean-Nós or Old Style singing, an ancient form of decorative Irish song, is of huge importance to him. He proudly boasts the beauty of this Irish art-form wherever he goes, delivering haunting renditions of poignant Irish folklore and mesmeric melodies to attentive audiences far and wide.A keen multi-instrumentalist, he has entertained audiences worldwide with displays of rhythmic dance, vibrant music and compelling vocals.